This blog post generated a debate. In this post, I reproduced a consolidation of all these discussions I was part:

“If the intention of the legislature was to exclude manufacturing from the purview of permitted business activities for LLP, it would be specifically excluded in the definition of the term “business”, but on contrary, the term has been defined inclusively to cover all possible business activities. Section 11(1)(a) of the LLP Act, 2008 provides for the formation of LLP to carry on any lawful business for profit. The term “Business” has been inclusively defined in Section 2(1)(e) of the Act and includes every trade, profession, service and occupation. Therefore the term Business has to be given general meaning. Further trade, profession, service and occupation have been specifically included as an abundant caution to avoid misunderstanding.

The Naresh Chandra Committee though has recommended opening LLP form initially for defined professional services, however, J J Irani committee in its report suggested to extend LLP model for small enterprises not seeking access to capital markets through listing on the stock exchange. Further 58th Report of Parliament Standing committee also recommended that the Definition of the term ‘business’ be expanded to cover a wide range of activities such as services, as may be specified, so as to make it more inclusive.

Therefore LLP act was drafted without limiting permitted business activities to services only, which is evident from the statement of objects and reasons as well, which inter-alia states – “the LLP would also be a suitable vehicle for small enterprises….””

We are using the same paragraph for a different conclusion. When services were included specifically, manufacturing seems to be excluded.

I have a clear question, whether permission granted or safeguard added like conversion requirements after an LLP achieving a certain threshold. It is not.

LLP as a form of organisation has been borrowed from the USA right? There it is used for service business only. That might be the reason for the current issue.

LLP is not a suitable form for manufacturing form of business by its nature. There is a specific requirement of suitable amendment in the law governing Limited Liability Partnership to enable its smooth functioning of manufacturing activities.

In services, trading, profession, we know what kind of activities is limited to which partner. In Manufacturing that is not possible. Doing full-scale manufacturing in activities in LLP is simply running a company (in practice) registered as LLP (just under a suitable law). We need to look into the very nature of transactions firstly thereafter the suitable law to register it.

I will surely write it in detail in a future post.

How can you say the inclusion of services in the definition of a business under the Limited Liability Partnerships translate into specifically excluding manufacturing?

A definition does not become inclusive by using terms includes in it when all contents are listed to make it exhaustive.

If I define “Son of Dashrath includes Laxman, Bharat and Shatrughan”, it impliedly excludes Ram or at least creates uncertainty not in favour of but against Ram.

If I define “Son of Dashrath includes Ram, Laxman, Bharat and Shatrughan”, it impliedly includes any illegitimate son of Dashrath, if any.

If I define “Son of Sumitra includes Ram and Bharat”, it impliedly includes her natural sons Bharat and Shatrughan.

Now back to the present discussion.

Even services were included by the parliamentary standing committee to give clarity. This inclusion of services was made on a specific suggestion made by the Institute of Company Secretaries of India. ICSI interesting and clearly did not suggest to include manufacturing activities in the definition of business. This was clearly in accordance with the legislative thought among all stakeholders at that time.

Permit me to quote Irani Committee report on company law 2015, in its Chapter III –

18.1 In view of the potential for growth of the service sector, requirement of providing flexibility to small enterprises to participate in joint ventures and agreements that enable them to access technology and bring together business synergies and to face the increasing global competition enabled through WTO etc., the formation of Limited Liability Partnerships (LLPs) should be encouraged.

18.2 It would be a suitable vehicle for partnership among professionals who are already regulated such as Company Secretaries, Chartered Accountants, Cost Accountants, Lawyers, Architects, Engineers, Doctors etc. However, it may also be considered for small enterprises not seeking access to capital markets through listing on the stock exchange.

18.3 We recommend that a separate Act be brought about to facilitate limited liability partnerships. The concept need not be addressed in the Companies Act.

This is because in general parlance business includes manufacturing. Many times business does not include service. So to avoid any confusion services were proposed to be explicitly covered.

Actually, when law defines a well-defined term to cut short its well-defined meaning, it becomes exhausting irrespective of the use of word inclusive.

To make it actually inclusive at least one actual inclusion beyond the general definition of the term defined (in this case business) should be there.

The application of the Principles of ejusdem generis is not compulsory while interpretation of inclusive definitions.

Definition usees the word Business includes every trade. Trade has a very wider meaning it includes manufacturing and trading both actions. Manufacturing is an activity out of the entire business cycle. There is no need to have specific wording mentioning activities like manufacturing or trading or distribution and hence in my view definition is sufficient enough to form LLP for any trade or business which has an element of manufacturing

Firstly, I doubt how the application of the principle of ejusdem generis is not compulsory.

The specific purpose of introducing a definition defeated if all general meaning is included. When selected meaning opted but another general meaning was not, it clearly shows the intention.

How will you define the term trade?

Buying and selling goods and services.

It’s called trading and not trade.

No, Please refer to the Black’s Law Dictionary, the 9th Edition Page 1629 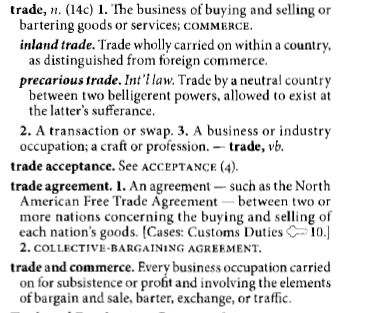 Also, see the meaning of trade and commerce on the same page of the Black’s Law Dictionary.

Please note, manufacturing and services are not there. Additionally, the definition in the LLP Act does not include trade and commerce but only the trade. It reads, “The definition of business includes every trade profession services occupation.”

Parliament had and still has liberty to allow LLP for any lawful purpose of profit and gain, with or without distribution of profit. (refer section related to incorporation and registration of an LLP).

So according to you MCA was right in its action and all LLP who are currently carrying out manufacturing are doing ultra virus thing?

There is nothing according to me, everything as per express provision of law. In my view, the amendment in LLP Act advisable. Sooner is good.

If the conclusion is that manufacturing was never allowed then many are doing ultra vires act. The amendment is a prospective solution.

The amendment is best, I can suggest here. My view is express inclusion of manufacturing should be there by way of amendment to the Act. Need deliberation whether all activities without limit are permitted or only MSME sector is permitted. In my view, the parliamentary standing committee and parliament opted for not including manufacturing.

Yes, post 10 years of the introduction of LLP Act, 2008 the manufacturing may be included in the definition for Micro and small manufacturing activities.

PostScript
Let me recall the background for LLP. Initial debate was whether to introduce LLP mode or not. It was unanimously decided in favour of LLP. Next question was LLP for whom. After long deliberations, it was concluded step by step approach to be followed. Accordingly, to begin with, LLP was permitted for professional services and later after gaining some experience to open for other sectors as well.