There is a very interesting post  on decline of influence of kayastha community in politics and other walk of government. It raises some major questions about this once influential community:

Though, I do not think that cast should be a basis of any representation to any assembly, parliament and other government but certainly there ar 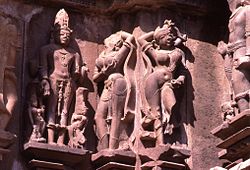 e some dangerous trends among this community which show decline of social standard and recognition of member of community among larger society.

The other things observed by the abovementioned blog that the community has shifted from its cultural, educational and social base values which are reflected decline of Urdu scholars, relationship with other Hindu communities as well as other religions, legal exposures and sad demise of Kaithi script.

According to legend, birth of first forefather of Kayastha, Chitragupta was result of request by Lord Yama to Lord Brhama for help in his duty in recording the good and evil deeds of mankind and administering justice. Brahma enjoined the newly-named Chitragupta to dispense justice and punish those who violated dharma (natural law). The Smriti of Yajnavalkya describes the Kayasthas as writers, scribes, clerk, accountants and Lawyers.

Kayastha were handling administrative duties since Gupta Empire and continued it through Sultanate, Mughal and British. The basic reason that no other community claimed such confidence with ruler and general public lies with their knowledge and good personal but neutral relationship with all walks of life.

Kayastha were not pious like Brahmins to order not lower like shudra who were like bounded labour of higher society. There place in Hindu Varna structure helped them to rule their subject on behalf of their political masters. They were well versed with Hindu religious text and personal law.

The Kayastha’s affinity for learning and socio-economic status, both enabled the community to develop expertise in the changing administrative policies and official languages, as different empires were established in India. The community learned and adapted to Persian, Turkic, Arabic and later Urdu. In fact, before Muslim League claim on Urdu Language, Urdu was considered as language of Kayasthas as it was mix of their professional languages (like Arabic and Persian) and mother tongue like Awadhi and Hindi.

During British administration (after 1857), Kayastha rushed to learn English at the cost of their own Urdu language. This was first big loss to the community at social angle in India.  At that time, good education was easily available to all community irrespective of their social hierarchy. English did not give them any special advantage. Same time, they considered that English language and script will rule India and not only lost their language Urdu but also their script Kaithi (very similar to present Dev Nagari). The script was official script of law courts in Bihar during British period.

While Kayasthas connect communities and administer them through Urdu, kaithi give them a legal advantage. Otherwise, knowledge and leadership was not restricted to them. During freedom struggle, Muslim League claimed Urdu as their language, rise of Hindu nationalism and partition forced Kayasthas not to claim back their language. It is evident that otherwise Urdu cinema of bollywood never claimed it as Urdu cinema but portrays it as Hindi cinema.

Series of events like rise of Muslim League, rise of Hindu nationalism, partition and desire to get a peaceful place independent India forced Kayasthas to dump Urdu, their harmonious communal relationships and in that way many centuries old political and administrative advantages.

Independent India become communally more polarised and so called Hindu nationalism become more and more brahmanical nationalism under protection of Nehru – Gandhi dynasty and Rastriya Swayam Sewak Sangha (RSS) movement. In absence of minority and dalit participation, our Education system, become more Brahmanical and effected all pillars of Indian government. One can find that many Kayasthas frustrated with Partition and events thereafter describe Muslims as enemy, responsible for partition and almost non- human. Unfortunately, Kayasthas turn more and more Hindu Nationalists. With rise of nationalism in society, quality of education always decreases due to utopia of glorious past and blind future and same happened to Kayastha community.

Series of event in India during last decade of twentieth century further polarised our communally polarised society on caste lines. There is evidently no place of harmonious relationship with all communities and kayasthas wrongly fail to see place of minority communities, backward castes, dalits and Adiwasis.  Already declined education status of kayastha got major setback with increased participation of earlier marginalised section of society supported by increased reservation.

However, with half – hearted economic reforms during last decade of last century, which are still pending, globalisation and rise of capitalism, give an otherwise wrong notion of opportunity to the community. Many of them looked for marketing, Managing, Customer care and BPO jobs against their traditional field of law, administration, accounting, Scribe, educators, writer, policy makers, and social, political and organisational leaders. Though private sector, give them some money but not respect and social standing which have been lost during twentieth century.